Suppose there existed a planet that went around the sun twice as fast as the earth.What would be its orbital size as compared to that of the earth ?

The escape speed of a projectile on the earth's surface is 11.2 kms−1. A body is projected out with thrice this speed. What is the speed of the body far away from the earth? Ignore the presence of the sun and other planets.

A body of mass m is placed on the earth surface is taken to a height of h=3R, then, change in gravitational potential energy is

A mass m is at a distance a from one end of a uniform rod of length l and mass M. Find the gravitational force on the mass due to tke rod.

The time period of a sceond's pendulum in a satellite is

Why does a black of wood held under water rise to the surface when released?

Assuming the earth to be a sphere of uniform mass density, how much would a body weigh (in N) half way down to the center of the earth if it weighed 250 N on the surface ? 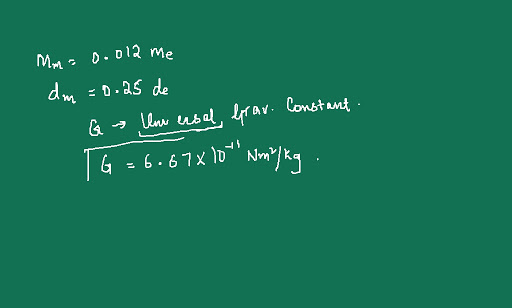